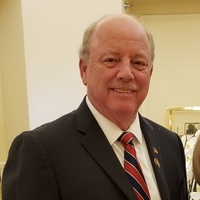 Jim is a 56-year resident of S.W. Florida. He started his tenure in Public Service as a paid Volunteer Fire Fighter with Lehigh Acres Fire Control District in the early seventies. He was subsequently hired and spent a short time there before becoming employed with the Florida Department of Corrections. He held various positions there to include Correctional Officer, Sergeant, Training Coordinator, Administrative Lieutenant and Shift Commander. He finished his last 10 years as an Investigator with the Inspector General’s Office.

After retirement he joined the team at Database Financial Services where he has been for the past 20 years. Currently he is the Vice President of sales. Jim specializes in working in the Public Service arena assisting individual employees and Districts with both pre and post retirement education and planning to include the Florida Retirement System, 175 and 185 Plans along with Deferred Compensation.

Jim currently serves as an Associate State Board Member of the Florida Association of Special Districts and the Halderman Creek MSTU in Collier County. He is also a Past State President of the Florida Council on Crime and Delinquency.